The Bank of Botswana (BoB) has reduced the Bank Rate from 6% to 5.5%. The last interest rate cut was made almost a year ago on the 6th of August 2015 by the Central Bank. The cut in the bank rate was always expected given the slow growth of the domestic economy.

The only uncertainty was on the timing of the cut. Botswana’s GDP is estimated to have contracted by 0.2% in the twelve months to March 2016, compared to the growth of 3.2% in March 2015. Inflation is currently contained mainly due to low domestic demand and subdued foreign price development. However, food prices have been stubbornly creeping up pushed by the devastating El Nino induced drought which has been described as the worst in 35 years by the United Nations Office for the Coordination of Humanitarian Affairs.

We are not alone in this interest rate reduction cycle.

ECB became the first major central bank to do so in June 2014. In January this year, the Bank of Japan also surprised markets with a move to negative interest rates in order to encourage banks to step up lending to support activity in the real economy, rather than pay a penalty to deposit excess cash at the central bank. Last week, the Bank of England stunned global markets by cutting interest rate for the first time in more than seven years from 0.5% to a new historic low of 0.25%. 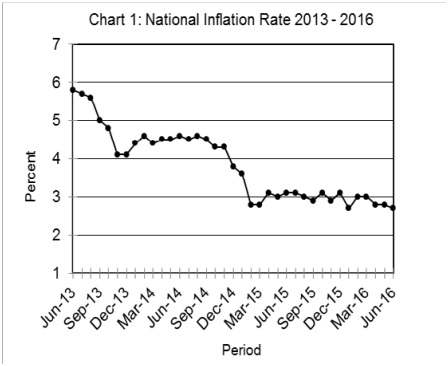 What does all these interest rates cuts signify?

The world economy (Excl the USA) is not looking good. Fresh economic data from China i.e. on retail sales, industrial output and trade data points to a slowdown in China’s economy. We have every reason to be worried by these not so good statics as China is the second economy in the world and the major consumer of commodities.

In the United States it’s the opposite. The US Federal Reserve began tightening monetary with the first interest rates increase in nearly a decade in December 2015. Another interest rate increase is widely expected before the end of this year due to improved labor market conditions and the likelihood that inflation is heading higher.

The going gets much tougher for local banks.

This is another hard pill to swallow for local banks. The cut in the bank rate will reduce banks interest margins further. Since the Bank of Botswana loosed its monetary policy local banks interest income and profitability has been falling. Last year all listed commercial banks released ‘profit warning statements’ due to the decline in profitability. FNBB, Botswana’s largest bank in terms of market capitalization has already issued a fresh profit warning statement ahead of the release of its FY 2016 financial results for the year ended 30 June 2016. The results are expected to be released on or before the 25th of August 2016. Deposits might also decline as investors will be discouraged to save due to the lower returns.

Will credit growth pick up?

It won’t be that much. Although we long entered an era of ultra-low interest rates in the history of the country, credit growth especially to productive sectors of the economy has not picked up as much as we would like. We believe the irony of this declining trend could be attributable to the deterioration of borrowers’ credit capacity and weak demand prospects. However, the cost of capital for business will certainly go down and this is good. The funds saved can be used for other critical expenses and this will in turn buoy spending in the economy.

Mortgages holders also have a reason to smile. Their monthly repayments will certainly reduce. (Motswedi Securities)

Trading in cryptocurrency not regulated in Botswana – BoB

Bank of Botswana to issue second emission of P50 banknote