The Mauritius Commercial Bank Group (MCB)) hosts 40 top executives representing 40 African banks at the week-long 2016 Africa Forward Together conference held at the five-star Ravenala Attitude Hotel. Africa Forward Together (AFT) is an annual event organised by MCB since 2009 to showcase its “Bank of Banks” initiative. Since its inception, 351 delegates representing 108 financial institutions and representing 27 countries have attended the conference, which also aims at fostering better understanding and mutual cooperation between African banks. 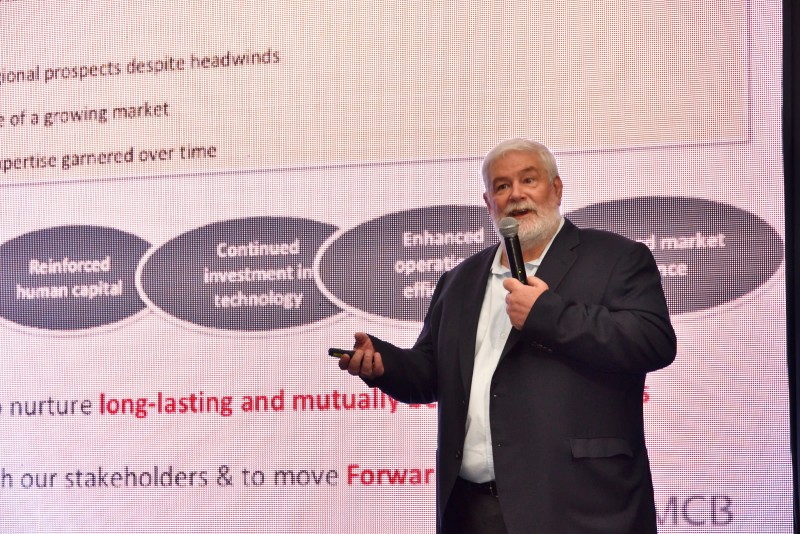 Opening the conference, MCB Group Chief Executive, Pierre Guy Noel said Africa remains their  main focus for growth. “There are plenty of things we can do in Africa and loads we can achieve together,” he said. “African banks can leverage MCB’s unique position in the region. Established since 1838, MCB is a strong regional leader, currently ranked first in East Africa and 17th among African banks according to The Banker.”

Bank of Banks  aims at positioning MCB as a regional platform offering bundled banking and financial industry capabilities to its counterparts. Bankers attending the Africa Forward Together event get first-hand knowledge of MCB’s human expertise and technological capabilities while exploring collaboration possibilities that could allow them to boost their services through outsourcing in Mauritius.

Over the last few years, an increasing number of African banks have teamed up with MCB to serve their customers better and more efficiently. Some have managed to offer new services to their customers in record times without investing heavily in technology or human resources. Others have discovered opportunities to expand their businesses through intelligent collaboration with one of Africa’s leading banks.

The « Bank of Banks » initiative is a key component of MCB’s African growth strategy. Instead of opening outlets across the continent and competing with local banks, MCB prefers to position itself as a privileged partner for institutions that want to scale new heights. As Africa gradually fulfils its promises and realizes its enormous potential, the continent’s banks are facing new challenges and have to meet growing and changing customer needs.

Summing up the challenges Africa has to face, Raoul Gufflet, Deputy Chief Executive, MCB, insisted on the fact that Africa is at a crossroad where it has to choose the right way forward. “This is where MCB fits in. AFT is not solely meant to showcase MCB’s value proposition but to explore new avenues of collaboration and sharing between African banks. AFT is about you, about your objectives and goals and what you would like to put into practice,” Raoul Gufflet, Deputy Chief Executive of MCB, told African bankers today.

MCB offers a full range of value added services to banks. This includes the issuance of documentary credits, international payments, management of cards services and electronic banking, internal auditing, risk management, non-banking financial services, custody services, SWIFT transfers and consulting services among others. By leveraging MCB’s world-class expertise, rich experience and state-of-the-art technology, other banks have an opportunity to speed up their development while delighting their customers.  Raoul Gufflet also indicated that MCB intends to expand its Private Banking arm in Africa.

Established in 1838, MCB is today the largest bank in East Africa and the 17h biggest on the continent. It is a blue chip on the Stock Exchange of Mauritius where it accounts for nearly a quarter of market capitalisation. Its strategy is to continuously diversify its services and its markets. To date, MCB’s international operations account for 55% of its results. It is currently present in Mauritius, South Africa, Kenya, Seychelles, Madagascar, Maldives, Réunion, Mayotte and France through a network of branches, associate companies and representative offices. It also has a vibrant network of correspondent banks across Africa and the rest of the world.