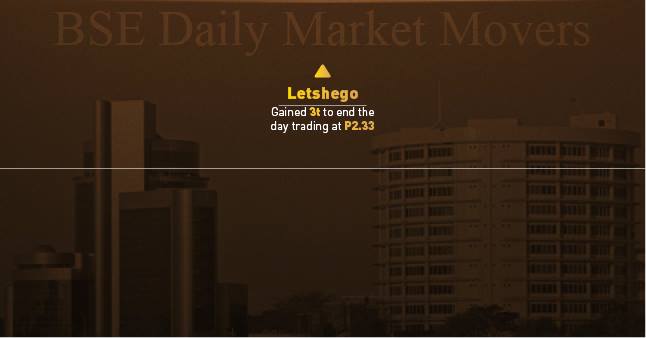 Letshego commenced a share buyback program on the 5th of September, when it purchased 13.35 million shares at a price of P2.04 a share. In the week under review the share price moved a considerable 28 thebe higher to close the week trading P2.37 a share. This is after the stock traded 48.6 million shares valued at P112.6 for the week. The weekly price jump of 13.4% earned the stock the title biggest price mover of the week.

The buyback is intended to streamline the company’s balance sheet, reduce capital and increasing leverage, which will translate to better efficiencies for shareholders, and is a strong signal to the market that the management of Letshego find the stock to be undervalued in the market.

The demand created by the share buyback has really created liquidity on the stock which could easily climb back to single digit figures for the year, not only on the back of huge demand but good underlying fundamentals. The company’s trailing twelve month Eps is at 6.9x against the weighted market average of 12.2x, while the dividend yield is 6.6% as compared to the market average of 4.1%.

BIHL which owns slightly over 25% of Letshego, edged up during the week, gaining 5 thebe to close the week at P17.18 per share. The company has been in an upward trajectory since the start of the year having gained an incredible P1.95 in the last 9 months to bring capital gains to 13% on a yield to date basis.

Choppies surprisingly edged up a thebe in rather thin volumes, following poor end of year results that highlighted, a decline in profitability in Botswana, the only profitable entity in the group, and further losses across all markets the company operates in. Earnings per share fell by half in the past year ended 30th June, to a mere 8.48t from 17.11t in the previous year.

While retailers are under discussion, the more diversified Sefalana Holdings lost a thebe on the last day of the week retreating back to P13.41 a share. The share was the only negative mover for what has been a rather bullish week.

The Domestic Company Index continues to rally in a bid to erase the accumulated year to date losses. After moving up by 1.36% to close at 9,766.95, the DCI managed to reduce the deficit to 7.88%, having crossed into double digit losses in August. The foreign company index remains relatively unchanged having nudged up over the week to close at 1,601.44. (Motswedi Securities)

Cresta and Letshego only movers during the week