For the first time ever, local farmers were able to enjoy an accredited training course for goat farming on home soil, without having to journey across the border for what has become an increasingly popular means of advancing one’s farming knowledge. The 27th and 28th of October 2016 saw Bushra Kalahari Reds in Gakuto, located in the heart of the Kweneng District, play host to Botswana’s inaugural Junior Goat Course. 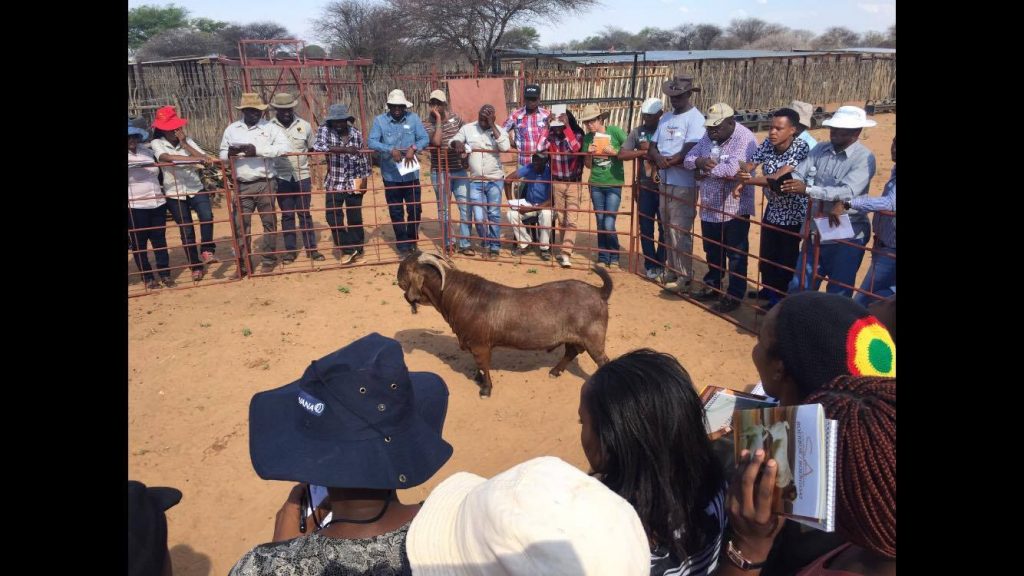 “This was the first time we held the course outside of South Africa, though it will certainly not be the last. We have been truly overjoyed at the wealth of passion, interest and indeed skill that already exists in the local farming community here in Botswana.”

A total of 45 people, who came all the way from as far as Tsabong, Selebi-Phikwe, Serowe, Palapye and Mahalapye, attended the course. The course was organised by the SA Kalahari Reds Club and presented by renowned SA Senior Goat Judge, Johnny Henderson. Henderson was, earlier this year, elected as one of the judges at the SA National Goat Championships in Kuruman, South Africa.

The Junior Course is fully accredited under the auspices of the South African Boer Goat Breeders’ Association (SABGBA). It aims to empower breeders and those in the farming community with the insights, tools, and knowledge to thrive further. Candidates who successfully complete the course will obtain a certificate from SABGBA and record of their achievement and certification kept with the Association at its Bloemfontein head office.

Local Kalahari Red breeder, Faheem Kala of Bushra, said: “I first undertook the Junior course in 2014 in Pretoria and continue to enjoy exceptional access to learning and insight through the SA Kalahari Reds Club. Since then, we have sought to ensure all Batswana farmers have the opportunity to undergo the training.”

Kala, who now serves on the Board of the SA Kalahari Reds Club, has earned a local reputation for excellence with the Kalahari Red breed, taking home a number of coveted accolades at the recent National Agriculture Show and Serowe Agriculture Show, including that of Grand Champion of the Yard for 2016. Farming goats for the last five years, he notes he is committed to promoting the small stock industry in the country.

“What is paramount is that we continue contributing to a more accessible and, most significantly, sustainable drive towards empowering our local farming community to excel even further. The turnout and the feedback from attendees is but one proof point of the potential for further growth. We need to embrace and nurture this further, as the more we can educate and empower farmers in Botswana, the more we can help the farming industry in the country.”

Bushra Kalahari Reds continued to make history, as the first full stud inspection on goats in Botswana was conducted on the farm prior before the course was held. Henderson inspected a selection of the Bushra goats to extraordinary result, with 65 out of the 80 goats inspected (between 9 and 18 months old) making stud grade. Performing the inspection, Johnny Henderson commended Bushra on the exceptional quality of the animals, who continues to be impressed by the quality of farming in Botswana and the passion and sense of community amongst local farmers.

“To give a clearer perspective, under the old points system of grading, I have seen no less than ten show quality 9-point studs here. I make special mention of the young females bred, as these are of a remarkable quality. I have been pleasantly surprised,” said Henderson.

“We have a number of members or friends of the Club based in Botswana, whom we continue to work with and support in an effort to grow the local base. The course is organised through the Club, ensuring no private gain to individual farmers or benefit beyond adding to the knowledge of the farmers. It also wards against the threat of exploitive farmers and middlemen. We are also then in a position to educate farmers on how to avoid falling prey to farmers from outside the country who take advantage of Batswana farmers through deceiving customers, selling inferior quality animals and / or at exorbitant prices, an issue we have a productive dialogue through local members with the local Ministry of Agriculture to manage against,” said Du Plessis.

After a successful inaugural edition of the course in Botswana, the Club anticipates increased interest and participation in future platforms designed to advance farming skills and knowledge amongst Batswana.