On her first visit to the West African nation of Cote d’Ivoire, Canada’s Minister of International Development, Marie-Claude Bibeau and the President of the African Development Bank Akinwumi Adesina, shared a common vision and commitment to the advancement of women and girls on the continent. 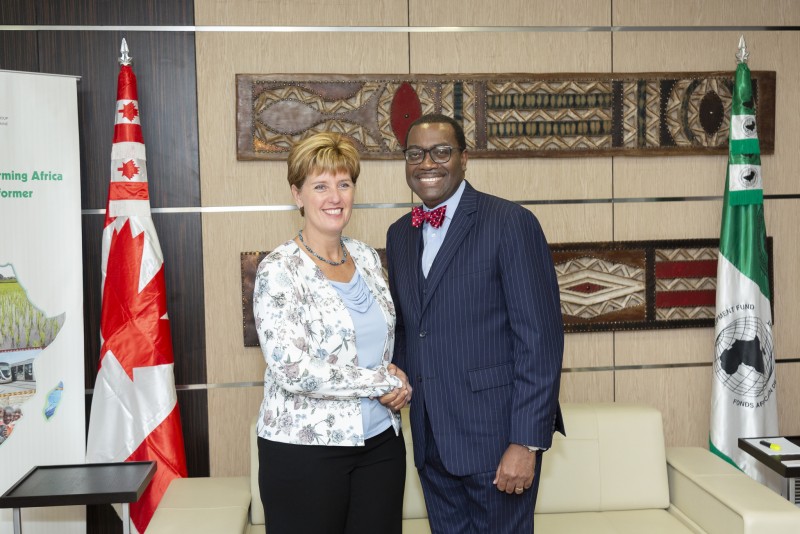 Canada is the fourth largest contributor to the Bank among non-regional members, and the sixth largest donor to the African Development Fund (ADF), the concessional arm of the Bank Group. The advancement of women and girls is a priority area for the Canadian government in keeping with its Feminist International Assistance Policy.

The Minister emphasized the need to involve African women in decision-making processes.

According to Bibeau “If we want to end poverty, women in Africa must be able to develop their full potential,” she said. She also expressed the hope that women would no longer be perceived as “mere beneficiaries” but as “agents of change.”

“This is the approach we are taking in Canada. We are working to ensure that 15% of our department’s budget is allocated to transformative projects for women,” Bibeau said.

The Gender Strategy is a central part of the Bank’s ambitious vision for Africa, based on the reality that gender equality is integral to Africa’s economic and social development. The vision includes creating opportunities for women, disadvantaged and marginalised people and communities so they can fully participate in and benefit from the development of their communities and nations.

Commending Adesina for exemplary leadership, Bibeau acknowledged that “change will not come overnight, but our collective actions will make a significant difference.” The Bank recorded exceptional results for 2017 with approvals of US $8.7 billion and over $7 billion of disbursements, the highest performance since its creation in 1964.

From 2010 to 2017, the Bank’s operations have positively impacted the lives of millions of Africans. 83 million Africans have benefited from improved access to transport, and 49 million have gained access   to clean water and sanitation. Nine million African women have been connected to electricity and the living conditions of 29 million more women have been significantly enhanced as a result of improvements in agriculture.

“We need to change the current system, and introduce a mechanism for rating and classifying financial institutions. Those who put the issue of gender at the center of their concerns should be at the forefront of this ranking,” he said.

According to Adesina, “the Bank plans to raise a US$ 300-million guarantee fund for the Affirmative Finance Action for Women in Africa (AFAWA) initiative.”  AFAWA is expected to leverage close to USD$ 3 billion over 10 years to empower female entrepreneurs through capacity building development, access to funding, and policy, legal and regulatory reforms to support enterprises led by women.

The initiative provides significant support for the advancement of Africa’s Gender agenda.  The Bank is helping build women’s market programs in countries such as Kenya, Nigeria, Sierra Leone, and the Democratic Republic of Congo. Through four commercial banks, at least 200,000 women owned businesses are expected to be impacted through financing, growth in revenues and through coaching and mentoring programs.

Adesina said he hoped Canada would champion the initiative, launched during the Bank’s 2016 Annual Meetings.

The Canadian Minister and the African Development Bank President also discussed closer cooperation between Canada and Africa, and Canada’s participation in the first Africa Investment Forum scheduled for November 2018 in South Africa.

The African Development Bank Group is one of Canada’s leading partners in supporting sustainable economic growth in Africa. Other Bank Group priority areas of focus include environment and renewable energy, inclusive governance, peace and security.

AfDB gets Triple A rating by all three major agencies